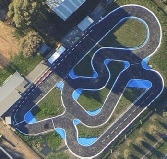 The track was custom built by Western Australian Radio Control Model Car Club (WARCMCC) using asphalt for the main purpose of racing 1/8th nitro powered radio controlled cars in the late eighties.  This track was the first track in Australia to feature a 10 degree banked sweeper at the end of the main straight. It was the home of WARCMCC and nitro On Road racing in WA for the next 20 years.

Although the track was originally built in a commercial zone, over the many years WARCMCC operated at this site, the suburb matured and combined with the re-zoning of the suburb for higher density housing in the late 90s noise problems started to arise.  In 2008 the local shire prohibited the use of nitro powered cars at the track due to noise issues, WARCMCC had to cease racing and the track was closed.  To this day WARCMCC have been unable to secure a location for a new nitro track and unfortunately the only nitro On Road venue in WA is now located in Bunbury, 2 hours south of Perth.

After much noise testing and deliberation, the track was reopened as an electric only track in 2010 as part of West Coast Model Rally Club (Inc) which has been racing at the adjacent off-road electric track for many years. 2011 was the first full season as an electric only on-road track.

The track has gone through a major face lift with the concreting of additional apexes and all apexes are now painted blue.  The track itself is 250 meters on the race line. The front straight is about 60 meters while the back straight is about 40 meters. The race direction is clock wise.  Turn 1, the 10 degree banked sweeper at the end of the main straight is still a unique aspect of this track.  Speeds of over 120km/h are now being attained by electric cars down the long front straight.

The track hosted the 2011 AARCMCC Electric On-Road Nationals in November 2011.